A Life at the Pictures: A Conversation with Lynne Ramsay 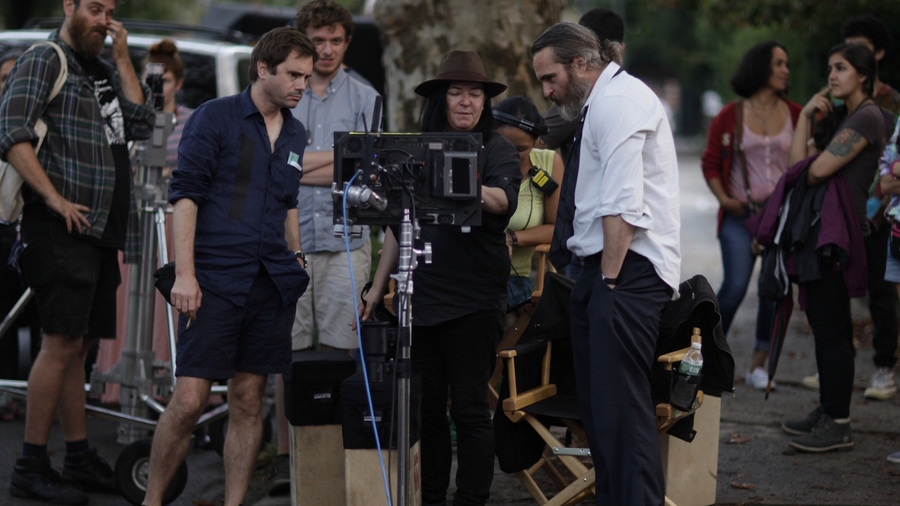 Lynne Ramsay on the set of

You Were Never Really Here

An uncompromising chronicler of grief and its aftershocks, Scottish writer-director Lynne Ramsay turns her characters inside out, evoking their inner worlds with a lyrical style that reveals the sharp eye she has honed since her early days as a photographer. From the shot of a boy wrapped in a lace curtain that begins her 1999 debut feature, Ratcatcher, to the image of Christmas lights flickering on motionless bodies in 2002’s Morvern Callar, the most memorable moments in her work demonstrate her ability to infuse a single frame with complex emotion and to interweave sound and image to haunting effect. The troubled figure at the center of Ramsay’s disquieting new thriller You Were Never Really Here is a hit man (Joaquin Phoenix) who uncovers a conspiracy while searching for a kidnapped teenager. But as with all of the director’s work, the plot is only part of her all-encompassing vision. Boiling the narrative down to pulp-fiction basics, she conveys the protagonist’s psychological state through her masterful control of atmosphere, created with the help of Phoenix’s unhinged performance and Jonny Greenwood’s menacing score.

Just before the release of You Were Never Really Here, which won prizes for best actor and best screenplay at Cannes last year, I sat down with Ramsay to chat about her early moviegoing life in Glasgow, the version of herself that emerges on set, and the mind-expanding power of chess.

What is your first movie memory?

It’s actually Don’t Look Now. I don’t think I was meant to be watching it. I just remember sitting behind the sofa and seeing the opening sequence, which was amazing to see as a kid. It’s terrifying and totally seared into my brain forever. You may have had this experience too, where you’ve seen a film when you were younger and think about it again later and feel like you know it really well, but you don’t know the name of it. I think I was sent to bed when my parents found out I was watching behind the sofa.

Is there a film that made you want to be a filmmaker?

Mostly I was brought up with studio films. My mom and dad were really obsessed with movies. They weren’t intellectual or fancy, but there was a voracious desire to watch so many movies. In Glasgow, they called it “the pictures” or “going to the pictures,” which I think is quite beautiful. I remember my mom telling me about going to see The Picture of Dorian Gray and losing her bus fare on the way home. She had to walk back through these dark fields, because it was a cinema in the middle of nowhere, and she felt like she was still in the movie. My parents watched a lot of Douglas Sirk, so I remember seeing Imitation of Life really young and being super affected by those epic melodramas. And there was Hitchcock, The Postman Always Rings Twice, Mildred Pierce, All About Eve . . .

When I was a teenager I had an arty boyfriend and we started going to the artier cinema. He was an anarchist and took me to the Glasgow Film Theatre, which was the only theater showing anything alternative at that time. I saw Ali: Fear Eats the Soul and it blew me away. I hadn’t seen anything like it and wondered why I hadn’t seen these kinds of films in multiplexes. I’d seen something else that was crap like two nights before. And even though I’d been brought up on studio pictures and liked some of the bigger movies, at that point in the eighties there wasn’t that much of note. There was also this real dive cinema called the Salon, in the west end of Glasgow, and I went to see this film called Blue Velvet and felt I’d entered a different universe. I just couldn’t get out of it for about three or four hours. It was a dark night in Glasgow, and I felt like I was still in that movie.

Then there was Maya Deren and Meshes of the Afternoon, which I saw when I was a photographer. I had a cool tutor who was like, “Watch this film with sound and then without sound.” It blew my mind and I applied to film school the day after I saw it, the last day you could apply. Then later on it was directors like Kubrick, Tarkovsky, and Bergman. The first Bergman I saw was The Virgin Spring and it just shook me up.

Smiles of a Summer Night

There’s a beautiful, haunting shot in Smiles of a Summer Night in which one of the characters wraps his head in a lace curtain. Ratcatcher and You Were Never Really Here both have similar shots.

It’s funny—a friend of mine, Paweł Pawlikowski, who made the film Ida, was saying he stole an image from Ratcatcher. I thought it was really sweet to say something like that, because that’s a great movie and it won an Oscar. But sometimes you don’t know where things come from. With Ratcatcher, that shot of the boy in the curtain was one of the first things I wrote in the script, and it was kind of a big deal for me. The boy opens the film, but then quickly [it’s clear that] he’s not the main character. It gives a sense of dread to the opening, and also a playfulness.

Do you find that you’re a different person behind the camera?

Absolutely. Not in the sense that I take on a character or anything like that, but I’m more focused. There are good things and bad things. First you’re like, I want my life back, this is so consuming! You never get any time of your own. I remember when we were making Ratcatcher, it was my first feature, and the crew felt too big to me. I was used to a tight little crew, and so I would move away from the crew and from the camera.

But one thing I’ve found is that I work really well when I’m under pressure, in a back-to-the-wall kind of situation. There’s something about feeling that pressure that brings out your best instincts. You know what’s right, you know how you feel, it’s very clear you need that shot, etc. I can’t decide what I want in a restaurant or what I want to wear, but in that environment, I’m really decisive.

If you could be a filmmaker at any time and place in history, when and where would that be?

Everyone always says the seventies, don’t they? But I’m sure it wasn’t that easy then either. It’s a strange time right now for cinema. Sometimes I think we’ve made things more complicated, like with digital filmmaking. Don’t get me wrong, there are so many good things about it, but I’m glad I learned on film because there is a certain discipline. You don’t just shoot everything and think you can sort it out in post. There’s a certain precision with film. Right now there’s a need for content, and for content to be spewed out very fast, but the quality of the content is what I’ve always been interested in.

So there are bad things and good things about all times. I’ve had producers say that film is dead or the auteur is dead, that nobody wants that anymore, that they don’t sell those movies. But I guess I’ll try to keep with it as long as I can and as long as people will see them.

Where do you look for inspiration when you’re not making films?

Living and existing. I watch tons of documentaries because I’m not on social media, so I find it interesting learning about new things or places or what’s going on in the world from different sources. But I try to live a bit of life as well. I think that’s really important. It just seems like people don’t get much of a moment to sit back and reflect, which I was able to do while I was living in Greece. This morning I went for a swim and it was nice to just not be worrying or thinking about anything that was happening and let my mind go off somewhere where I could have ideas. You’ve got to have your eyes open.

I’ve been playing chess, even though I’m absolutely rubbish at it. My partner taught me about five years ago. The thing about chess is, the more you learn, the more you realize you’re terrible. But the great thing about a game like that is, when you’re doing it, you can only be in that world. I realize I’m terrible, but I love playing it because I can’t think about this or that.

Aside from film, what was the last work in another art form that moved you?

I’ve always loved the Aphex Twin track “Rhubarb.” I’ve wanted to use that track for years, but it’s so beautiful that I think it would be diminished unless you got the right thing with it. But that track has always been with me and is something I’ve found to be kind of spiritual, elegiac. He’s a genius. He can have a song that’s like an assault on the ears, and then he can do a song like this, where it feels like you just open up. I actually played this song for Joaquin. There’s a shot in the film where there’s a girl in the street and she’s crying. I loved this girl and found her so amazing. I played the track for Joaquin and we were looking at the shot and we were both mesmerized. He hadn’t heard it before, and it was lovely to introduce it to someone, like a gift.

Hillary Weston is staff writer and social media director at the Criterion Collection. Her work has appeared in Film Quarterly, BOMB, Interview, and BlackBook.

from The Criterion Current https://ift.tt/2HIDM1b

"We Will Rock You!": Bohemian Rhapsody è al cinema